I especially love the 1-100 song! I have used it as a clean up song, as an exercise song, as a song for the Hundredth Day of School, and I know that I used it for other purposes that I can’t recall right now! It just really comes in handy. And some children even sing it to themselves when they are being tested on counting skills.

One thing that you should know is that I designed the songs to be used with the Jumpin’ Numbers and Shakin’ Shapes cards. It’s fine to use them without the cards, but they are more effective to teach the shapes and numerals when used in conjunction with the cards.


So what’s so special about these flash cards? They contain a visual clue to the movement embedded into the numeral or shape. When kids do the movement and say the number or shape at the same time, they use all of their learning modalities and styles (visual, auditory, musical, kinesthetic) to help them recall the names of the numbers and shapes.

The character embedded into each number or shape that serves as a mnemonic device to help jog the memory.

This is how it works:
1. The children are shown a flash card of a number or shape with a visual cue on it.
2. They make a motion that relates to the visual cue. (Ex. For number 8 they make a monkey scratching motion, since there is a monkey on the numeral eight card.)
3. They learn songs that further reinforce the names of the numbers or shapes and its corresponding motion.
4. Later, the visual cue on the number or shape is removed, and the kids respond as before, saying the name of the number and doing its motion.
5. Soon (usually after about 3 weeks of school), most Kindergartners have learned all of the numbers and shapes in a fun and painless way.

Preview the video of the Song along with the Visual Cues NOW!

For example, there is a monkey on the number eight card. When the children see it, they are coached to make a monkey motion and say, “Eight!” Often, if they cannot immediately remember the name of the numeral, when they make the motion the memory is jogged and the number often pops right out of their mouths, often much to their surprise!

The movement of the hands work to activate the muscle memory that some children need to help them remember the name of that number or shape. As an added bonus, many of the motions mimic the form of the number or shape. For example, the motion for number eight with the hands overhead and the knees bent forms the shape of the eight. The motion for number four is to hop with two hands up on your head like bunny ears; this is meant to look like the two top lines on a number four.

Learning with Movement and Music is Natural and Easy

The learning that takes place here is as easy and natural for a child as learning a nursery rhyme such as “The Eency Weency Spider.” As soon as a child’s hands start making motion of the spider going up the spout, they begin to sing that little song, rarely forgetting a single word. I would be very surprised if most adults reading this cannot remember this little children’s song as well! This is because the movement combined with the music put that little song right into long term memory; it will probably be in most adults memories forever!

For more information on teaching numbers and shapes, click here.
Thanks for joining me today!
And by the way, we are having a SALE this week on HeidiSongs to celebrate the arrival of our newly revised,
FULLY ANIMATED CLASSROOM MANAGEMENT DVD! 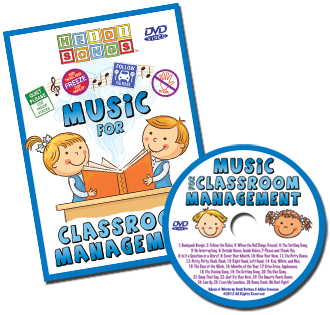 This DVD is soooo much fun! (See the clip below!)

Watch a Classroom Management Song – When the Bell Rings, FREEZE!

You can save 15% on your whole HeidiSongs order by using the code SCHOOL2015 at checkout.

Want to win your own copy of Jumpin’ Numbers and Shakin’ Shapes or $20 t0 HeidiSongs and choose your own DVD? Here is your chance!!

This giveaway has been sponsored by Kindergarten Chaos and contains affiliate links.

Do you know that Kindergarten Chaos offers personal development courses & workshops? I share my tried and true tips and ideas for teaching intentionally and with purpose and fun to the kids of TODAY!

Join In On The Fun!

Made with ❤ AGC ECOMMERCE